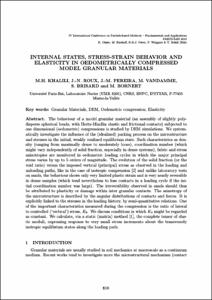 Show full item record
Khalili, M.H.
Roux, J.-N.
Pereira, J. M.
Vandamme, M.
Brisard, S.
Bornert, M.
Document typeConference report
PublisherCIMNE
Rights accessOpen Access
Abstract
The behaviour of a model granular material (an assembly of slightly polydisperse spherical beads, with Hertz-Mindlin elastic and frictional contacts) subjected to one dimensional (oedometric) compressions is studied by DEM simulations. We systematically investigate the inﬂuence of the (idealized) packing process on the microstructure and stresses in the initial, weakly conﬁned equilibrium state. Such characteristics as density (ranging from maximally dense to moderately loose), coordination number (which might vary independently of solid fraction, especially in dense systems), fabric and stress anisotropies are monitored in oedometric loading cycles in which the major principal stress varies by up to 5 orders of magnitude. The evolution of the solid fraction (or the void ratio) versus the imposed vertical (principal) stress as observed in the loading and unloading paths, like in the case of isotropic compression [2] and unlike laboratory tests on sands, the behaviour shows only very limited plastic strain and is very nearly reversible in dense samples (which tend nevertheless to lose contacts in a loading cycle if the initial coordination number was large). The irreversibility observed in sands should thus be attributed to plasticity or damage within inter granular contacts. The anisotropy of the microstructure is described by the angular distributions of contacts and forces. It is explicitly linked to the stresses in the loading history, by semi-quantitative relations. One of the important characteristics measured during the compression is the ratio of lateral to controlled (‘vertical’) stress, K0. We discuss conditions in which K0 might be regarded as constant. We calculate, via a static (matrix) method [1], the complete tensor of elastic moduli, expressing response to very small stress increments about the transversely isotropic equilibrium states along the loading path.
URIhttp://hdl.handle.net/2117/188127
ISBN978-84-944244-7-2
Anglès
Collections
Share: