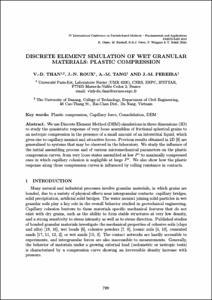 Show full item record
Than, V.-D.
Roux, J-N.
Tang, A.-M.
Pereira, J.-M.
Document typeConference report
PublisherCIMNE
Rights accessOpen Access
Abstract
We use Discrete Element Method (DEM) simulations in three dimensions (3D) to study the quasistatic response of very loose assemblies of frictional spherical grains to an isotropic compression in the presence of a small amount of an interstitial liquid, which gives rise to capillary menisci and attractive forces. Previous results obtained in 2D [8] are generalized to systems that may be observed in the laboratory. We study the influence of the initial assembling process and of various micromechanical parameters on the plastic compression curves, from very loose states assembled at low P∗ to maximally compressed ones in which capillary cohesion is negligible at large P∗. We also show how the plastic response along those compression curves is influenced by rolling resistance in contacts.
URIhttp://hdl.handle.net/2117/188077
ISBN978-84-944244-7-2
Anglès
Collections
Share: