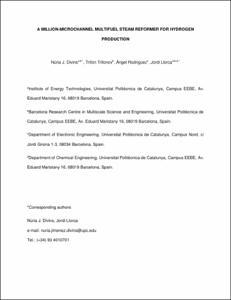 Except where otherwise noted, content on this work is licensed under a Creative Commons license : Attribution-NonCommercial-NoDerivs 3.0 Spain
Abstract
A functionalized silicon micromonolith of 7 mm in diameter and 210 μm-thick was evaluated for the production of hydrogen from the steam reforming (SR) of various fuels, containing different functional groups, such as ethanol, acetic acid, 2-propanol, acetone, and 2-methoxyethanol. The micromonolith consisted of 2 million regular channels of 3.3 μm in diameter, which were coated with a 100-nm RhPd/CeO2 catalytic layer. The catalytic activity was tested at temperatures between 823 and 1023 K, using overstoichiometric steam-to-carbon ratios and operating at contact times between 0.005 and 0.009 s. The best performance was obtained for the 2-methoxyethanol SR tests, where 53% H2 selectivity was recorded. A remarkable hydrogen production normalized by reactor volume of 110 LNH2·mL2-methoxyethanol, liquid−1 cm−3Reactor was recorded, leading to comparable H2 yields to those obtained with a conventional monolith coated with the same RhPd/CeO2 catalyst, owing to the large contact area. After more than 80 h under reaction conditions, the micromonolith was characterized by SEM and TEM. SEM analyses showed that no channels were blocked due to carbon deposition nor detached CeO2 layers were found. These results demonstrate the feasibility of using catalytic Si micromonoliths as microreformers to generate hydrogen from the SR of different fuels to power portable fuel cells.
Description
This research received funding from the postdoctoral fellowships programme Beatriu de Pinós (2018 BP 00146), funded by the Secretary of Universities and Research (Governement of Catalonia) and by Horizon 2020 programme of research and innovation of the European Union under the Marie Skłodowska-Curie grant agreement No 801370.
CitationJ. Divins, N. [et al.]. A million-microchannel multifuel steam reformer for hydrogen production. "Catalysis today", 5 Maig 2020.
URIhttp://hdl.handle.net/2117/188074
DOI10.1016/j.cattod.2020.04.049
ISSN0920-5861
Publisher versionhttps://www.sciencedirect.com/science/article/abs/pii/S0920586120302431
Collections
Share: