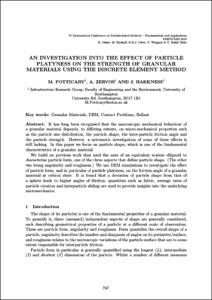 Show full item record
Potticary, M.
Zervos, A.
Harkness, J.
Document typeConference report
PublisherCIMNE
Rights accessOpen Access
Abstract
It has long been recognised that the macroscopic mechanical behaviour of a granular material depends, to differing extents, on micro-mechanical properties such as the particle size distribution, the particle shape, the inter-particle friction angle and the particle strength. However, a systematic investigation of some of these effects is still lacking. In this paper we focus on particle shape, which is one of the fundamental characteristics of a granular material. We build on previous work that used the axes of an equivalent scalene ellipsoid to characterise particle form, one of the three aspects that define particle shape. (The other two being angularity and roughness.) We use DEM simulations to investigate the effect of particle form, and in particular of particle platyness, on the friction angle of a granular material at critical state. It is found that a deviation of particle shape from that of a sphere leads to higher angles of friction; quantities such as fabric, average rates of particle rotation and interparticle sliding are used to provide insights into the underlying micromechanics.
URIhttp://hdl.handle.net/2117/188072
ISBN978-84-944244-7-2
Anglès
Collections
Share: