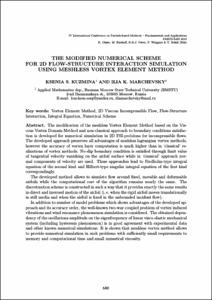 Show full item record
Kuzmina, Ksenia S.
Marchevsky, Ilia K.
Document typeConference report
PublisherCIMNE
Rights accessOpen Access
Abstract
The modification of the meshless Vortex Element Method based on the Viscous Vortex Domain Method and non-classical approach to boundary conditions satisfaction is developed for numerical simulation in 2D FSI-problems for incompressible flows. The developed approach preserves all advantages of meshless lagrangian vortex methods, however the accuracy of vortex layer computation is much higher than in ‘classical’ re- alizations of vortex methods. No-slip boundary condition is satisfied through limit value of tangential velocity vanishing on the airfoil surface while in ‘classical’ approach nor- mal components of velocity are used. These approaches lead to Fredholm-type integral equation of the second kind and Hilbert-type singular integral equation of the first kind correspondingly. The developed method allows to simulate flow around fixed, movable and deformable airfoils while the computational cost of the algorithm remains nearly the same. The discretization scheme is constructed in such a way that it provides exactly the same results in direct and inversed motion of the airfoil (i. e. when the rigid airfoil moves translationally in still media and when the airfoil is fixed in the unbounded incident flow). In addition to number of model problems which shows advantages of the developed ap- proach and its accuracy order, the well-known two-way coupled problem of vortex induced vibrations and wind resonance phenomenon simulation is considered. The obtained depen- dency of the oscillations amplitude on the eigenfrequency of linear visco-elastic mechanical system (including hysteresis phenomenon) is in good agreement with experimental data and other known numerical simulations. It is shown that meshless vortex method allows to provide numerical simulation in such problems with sufficiently small requirements to memory and computational time and small numerical viscosity.
URIhttp://hdl.handle.net/2117/188046
ISBN978-84-944244-7-2
Anglès
Collections
Share: