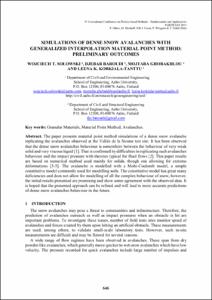 Show full item record
Solowski, Wojciech T.
Baroudi, Djebar
Ghobakhlou, Mojtaba
Korkiala-Tanttu, Leena K.
Document typeConference report
PublisherCIMNE
Rights accessOpen Access
Abstract
The paper presents material point method simulations of a dense snow avalanche replicating the avalanches observed at the Vallée de la Sionne test site. It has been observed that the dense snow avalanches behaviour is somewhere between the behaviour of very weak solid and very viscous liquid [1]. That is confirmed by difficulties in replicating such avalanches behaviour and the impact pressure with theories typical for fluid flows [2]. This paper results are based on numerical method used mainly for solids, though one allowing for extreme deformations [3-5]. The avalanche is modelled with a Mohr-Coulomb model, a simple constitutive model commonly used for modelling soils. The constitutive model has great many deficiencies and does not allow for modelling of all the complex behaviour of snow, however, the initial results presented are promising and show some agreement with the observed data. It is hoped that the presented approach can be refined and will lead to more accurate predictions of dense snow avalanches behaviour in thefuture.
URIhttp://hdl.handle.net/2117/187976
ISBN978-84-944244-7-2
Anglès
Collections
Share: