The fate of CO white dwarfs that experience slow deflagrations 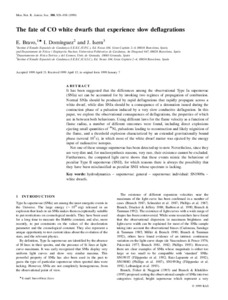 It has been suggested that the differences among the observational Type Ia supernovae (SNIa) set can be accounted for by invoking two regimes of propagation of combustion. Normal SNIa should be produced by rapid deflagrations that rapidly propagate across a white dwarf, while dim SNIa should be a consequence of a detonation issued during the contraction phase of a pulsation induced by a very slow conductive deflagration. In this paper, we explore the observational consequences of deflagrations, the properties of which are in between both behaviours. Using different laws for the flame velocity as a function of flame radius, a number of different outcomes were found, including direct explosions ejecting small quantities of 56Ni, pulsations leading to recontraction and likely reignition of the flame, and a threshold explosion characterized by an extended gravitationally bound phase (several 103 s), in which most of the white dwarf matter was ejected by the energy input of radioactive isotopes. Not one of these strange supernovae has been detected up to now. Nevertheless, since they are very dim and, for nucleosynthesis reasons, very rare, their existence cannot be excluded. Furthermore, the computed light curve shows that these events mimic the behaviour of peculiar Type II supernovae (SNII), for which reasons there is always the possibility that they have been misclassified as peculiar SNII whose spectrum is lacking.
CitationBravo, E.; Domínguez, I.; Isern, J. The fate of CO white dwarfs that experience slow deflagrations. "Monthly notices of the Royal Astronomical Society", Octubre 1999, vol. 308, núm. 4, p. 928-938.
URIhttp://hdl.handle.net/2117/18795
DOI10.1046/j.1365-8711.1999.02742.x
ISSN0035-8711
Publisher versionhttp://onlinelibrary.wiley.com/doi/10.1046/j.1365-8711.1999.02742.x/pdf