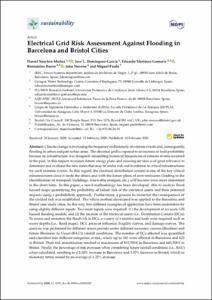 Stevens, John
Pardo, Miguel
Document typeArticle
Rights accessOpen Access
European Commission's projectRESCCUE - RESCCUE (EC-H2020-700174)
Abstract
Climate change is increasing the frequency and intensity of extreme events and, consequently, flooding in urban and peri-urban areas. The electrical grid is exposed to an increase in fault probability because its infrastructure was designed considering historical frequencies of extreme events occurred in the past. In this respect, to ensure future energy plans and securing services is of great relevance to determine and evaluate the new zones that may be under risk and its relation to critical infrastructures for such extreme events. In this regard, the electrical distribution system is one of the key critical infrastructures since it feeds the others and with the future plans of zero-emissions (leading to the electrification of transport, buildings, renewable energies, etc.) will become even more important in the short term. In this paper, a novel methodology has been developed, able to analyze flood hazard maps quantifying the probability of failure risk of the electrical assets and their potential impacts using a probabilistic approach. Furthermore, a process to monetize the consequences of the yielded risk was established. The whole method developed was applied to the Barcelona and Bristol case study cities. In this way, two different examples of application have been undertaken by using slightly different inputs. Two main inputs were required: (1) the development of accurate GIS hazard flooding models; and (2) the location of the electrical assets (i.e., Distribution Centers (DCs)). To assess and monetize the flood risk to DCs, a variety of variables and tools were required such as water depths (i.e., flood maps), DCs’ areas of influence, fragility curves, and damage curves. The analysis was performed for different return periods under different scenarios, current (Baseline) and future (Business As Usual (BAU)) rainfall conditions. The number of DCs affected was quantified and classified into different categories of risk, where up to 363 were affected in Barcelona and 623 in Bristol. Their risk monetization resulted in maximums of 815,700 € in Barcelona and 643,500 € in Bristol. Finally, the percentage of risk increases when considering future rainfall conditions (i.e., BAU) when calculated, resulting in a 2.38% increase in Barcelona and 3.37% increase in Bristol, which in monetary terms would be an average of a 22% increase.
CitationSánchez, D. [et al.]. Electrical grid risk assessment against flooding in Barcelona and Bristol cities. "Sustainability", Febrer 2020, vol. 12, núm. 4, p. 1527:1-1527:20.
URIhttp://hdl.handle.net/2117/187924
DOI10.3390/su12041527
ISSN2071-1050
Publisher versionhttps://www.mdpi.com/2071-1050/12/4/1527
Collections
Share: