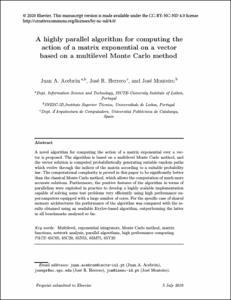 Except where otherwise noted, content on this work is licensed under a Creative Commons license : Attribution-NonCommercial-NoDerivs 4.0 International
ProjectCOMPUTACION DE ALTAS PRESTACIONES VII (MINECO-TIN2015-65316-P)
Abstract
A novel algorithm for computing the action of a matrix exponential over a vector is proposed. The algorithm is based on a multilevel Monte Carlo method, and the vector solution is computed probabilistically generating suitable random paths which evolve through the indices of the matrix according to a suitable probability law. The computational complexity is proved in this paper to be significantly better than the classical Monte Carlo method, which allows the computation of much more accurate solutions. Furthermore, the positive features of the algorithm in terms of parallelism were exploited in practice to develop a highly scalable implementation capable of solving some test problems very efficiently using high performance supercomputers equipped with a large number of cores. For the specific case of shared memory architectures the performance of the algorithm was compared with the results obtained using an available Krylov-based algorithm, outperforming the latter in all benchmarks analyzed so far.
CitationAcebrón, J.; Herrero, J.; Monteiro, J. A highly parallel algorithm for computing the action of a matrix exponential on a vector based on a multilevel Monte Carlo method. "Computers & mathematics with applications", 1 Gener 2020, vol. 79, núm. 12, p. 3495-3515.
URIhttp://hdl.handle.net/2117/187864
DOI10.1016/j.camwa.2020.02.013
ISSN0898-1221
Publisher versionhttps://www.sciencedirect.com/science/article/pii/S0898122120300808
Other identifiershttps://arxiv.org/abs/1904.12754
Collections
Share: