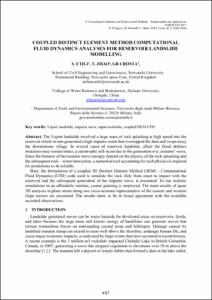 Show full item record
Cheng, H.
Yamamoto, H.
Document typeConference report
PublisherCIMNE
Rights accessOpen Access
All rights reserved. This work is protected by the corresponding intellectual and industrial property rights. Without prejudice to any existing legal exemptions, reproduction, distribution, public communication or transformation of this work are prohibited without permission of the copyright holder
Abstract
Geosynthetic Reinforced Soil (GRS) is widely used in infrastructure projects such as retaining wall and road/railway subgrade for technical and economical reasons. Despite of the worldwide usage, the basic mechanism of such reinforcement remains obscure, owing to its discontinuous and heterogeneous nature. Instead of being layered by planar geosynthetic sheets, soil can be wrapped entirely in geosynthetic containers as soilbags, which improves bearing capacity and contains the dilatancy of soil. To gain insights into soilbag reinforcement mechanisms and facilitate the development of soilbag’s constitutive relation, the authors numerically investigated the micromechanical behavior of the GRS inside a woven geotextile soilbag under simple shear, by using the Discrete Element Method (DEM). Global and local stress states and fabric anisotropies in the GRS were investigated. With sustained shear, the global stress path first approaches the critical state line of the GRS and then turns to soilbag’s compression line. Meanwhile, local loading-unloading stress paths are experienced, which may account for high damping of soilbags in cyclic shear. The reducing fabric anisotropies of normal and tangential force chains suggest greater confinement from the lateral sides of the geotextile container during simple shear. With new findings in the stress states and the fabric anisotropies of the wrapped GRS, the confinement mechanism of soilbag is better understood.
URIhttp://hdl.handle.net/2117/187863
ISBN978-84-944244-7-2
Anglès
Collections
Share: