A discrete approach to describe the elastic-plastic behaviour of snow 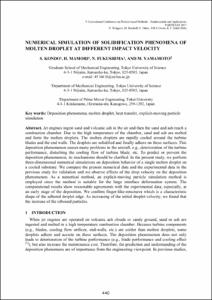 Show full item record
Peters, Bernhard
Michael, Mark
Nicot, François
Document typeConference report
PublisherCIMNE
Rights accessOpen Access
All rights reserved. This work is protected by the corresponding intellectual and industrial property rights. Without prejudice to any existing legal exemptions, reproduction, distribution, public communication or transformation of this work are prohibited without permission of the copyright holder
Abstract
Snow is composed of small ice particles and, therefore, behaves as a granular material with a variety of sizes and shapes. Understanding the mechanical behaviour of snow is important in areas such as natural hazards e.g. snow avalanches, or traction characteristics of tires with a snow covered road. Therefore, the objective of the current contribution is to present an advanced discrete approach to predict the elastic-plastic behaviour of snow. For this purpose, snow is described by a ﬁnite number of discrete ice grains similar to the Discrete-Element Method (DEM) with ice bonds as a link between individual grains and including a creep law for ice. Bonds may rupture under excessive load or may be formed during a contact between ice grains. Hence, the integral behaviour of snow is represented by the combined properties of impact and bonds depending on strain rate, density and temperature. The collision model is based on the linear hysteretic model developed by Walton and Braun [], which accounts for the eﬀect of plasticity. For this behaviour the impact between grains is distinguished into a loading and detaching phase represented by a loading and unloading stiﬀness constant. Additionally, friction behaviour into the tangential direction at the point of impact and dissipation i.e. coeﬃcient of restitution is taken into account. A bond between two ice grains is represented by a cylinder that is allowed to undergo tension, shear, torsion about its axis and bending. These translational and rotational displacements of a bonding cylinder lead to appropriate strains that yield corresponding stresses with a constitutive model including Youngs modulus E and the Poisson ratio ν. The stresses acting on a bond are converted to forces and moments that determine in conjunction with Newtons 2nd law the kinematics of the ice grains and the overall mechanical behaviour of the ensemble.
URIhttp://hdl.handle.net/2117/187846
ISBN978-84-944244-7-2
Anglès
Collections
Share: