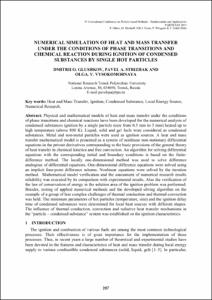 Show full item record
Glushkov, Dmitrii O.
Strizhak, Pavel A.
Vysokomornaya, Olga V.
Document typeConference report
PublisherCIMNE
Rights accessOpen Access
Abstract
Physical and mathematical models of heat and mass transfer under the conditions of phase transitions and chemical reactions have been developed for the numerical analysis of condensed substances ignition by a single particle (size from 0.5 mm to 5 mm) heated up to high temperature (above 800 K). Liquid, solid and gel fuels were considered as condensed substances. Metal and non-metal particles were used as ignition sources. A heat and mass transfer mathematical model is presented as a system of nonlinear non-stationary differential equations in the private derivatives corresponding to the basic provisions of the general theory of heat transfer in chemical kinetics and free convection. An algorithm for solving differential equations with the corresponding initial and boundary conditions is based on the finite- difference method. The locally one-dimensional method was used to solve difference analogous of differential equations. One-dimensional difference equations were solved using an implicit four-point difference scheme. Nonlinear equations were solved by the iteration method. Mathematical model verification and the assessment of numerical research results reliability was executed by its comparison with experimental results. Also the verification of the law of conservation of energy in the solution area of the ignition problem was performed. Besides, testing of applied numerical methods and the developed silving algorithm on the example of a group of less complex challenges of thermal conduction and thermal convection was held. The minimum parameters of hot particles (temperature, size) and the ignition delay time of condensed substances were determined for local heat sources with different shapes. The influence of thermal conduction, convection and radiative heat transfer mechanisms in the “particle – condensed substance” system was established on the ignition characteristics.
URIhttp://hdl.handle.net/2117/187793
ISBN978-84-944244-7-2
Anglès
Collections
Share: