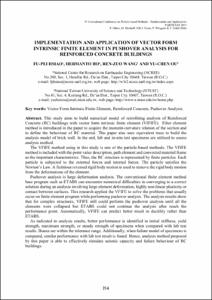 Show full item record
Hsiao, Fu-Pei
Ho, Hermanto
Wang, Ren-Zuo
Ou, Yu-Chen
Document typeConference report
PublisherCIMNE
Rights accessOpen Access
Abstract
This study aims to build numerical model of retrofitting analysis of Reinforced Concrete (RC) buildings with vector form intrinsic finite element (VIFIFE). Fiber element method is introduced in the paper to acquire the moment-curvature relation of the section and to define the behaviour of RC material. This paper also uses equivalent truss to build the analysis model of brick wall. In the end, lab and in-situ test specimens are tilized to assess analysis method. The VFIFE method using in this study is one of the particle-based methods. The VFIFE method is included with the point value description, path element and convected material frame as the important characteristics. Thus, the RC structure is represented by finite particles. Each particle is subjected to the external forces and internal forces. The particle satisfies the Newton’s Law. A fictitious reversed rigid body motion is used to remove the rigid body motion from the deformations of the element. Pushover analysis is large deformation analysis. The conventional finite element method base program such as ETABS can encounter numerical difficulties in converging to a correct solution during an analysis involving large element deformation, highly non-linear plasticity or contact between surfaces. This research applied the VFIFE to solve the problems that usually occur on finite element program while performing pushover analysis. The analysis results show that for complex structures, VFIFE still could perform the pushover analysis until all the elements were collapsed but ETABS could not continue the analysis after reach the performance point. Automatically, VFIFE can predict better result in ductility rather than ETABS. As indicated in analysis results, better performance is identified in initial stiffness, yield strength, maximum strength, or steady strength of specimens when compared with lab test results. Biases are within the tolerance range. Additionally, when failure model of specimens is compared, similar performance with lab test result is found. Hence, analysis method proposed by this paper is able to effectively simulate seismic capacity and failure behaviour of RC buildings.
URIhttp://hdl.handle.net/2117/187782
ISBN978-84-944244-7-2
Anglès
Collections
Share: