Validation of the gpu based blaze-dem framework for hopper discharge 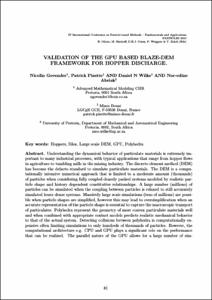 Show full item record
Govender, Nicolin
Pizette, Patrick
Wilke, Daniel N
Abriak, Nor-edine
Document typeConference report
PublisherCIMNE
Rights accessOpen Access
All rights reserved. This work is protected by the corresponding intellectual and industrial property rights. Without prejudice to any existing legal exemptions, reproduction, distribution, public communication or transformation of this work are prohibited without permission of the copyright holder
Abstract
Understanding the dynamical behavior of particulate materials is extremely important to many industrial processes, with typical applications that range from hopper flows in agriculture to tumbling mills in the mining industry. The discrete element method (DEM) has become the defacto standard to simulate particulate materials. The DEM is a compu- tationally intensive numerical approach that is limited to a moderate amount (thousands) of particles when considering fully coupled densely packed systems modeled by realistic par- ticle shape and history dependent constitutive relationships. A large number (millions) of particles can be simulated when the coupling between particles is relaxed to still accurately simulated lesser dense systems. Massively large scale simulations (tens of millions) are possi- ble when particle shapes are simplified, however this may lead to oversimplification when an accurate representation of the particle shape is essential to capture the macroscopic transport of particulates. Polyhedra represent the geometry of most convex particulate materials well and when combined with appropriate contact models predicts realistic mechanical behavior to that of the actual system. Detecting collisions between polyhedra is computationally ex- pensive often limiting simulations to only hundreds of thousands of particles. However, the computational architecture e.g. CPU and GPU plays a significant role on the performance that can be realized. The parallel nature of the GPU allows for a large number of simple independent processes to be executed in parallel. This results in a significant speed up over conventional implementations utilizing the Central Processing Unit (CPU) architecture, when algorithms are well aligned and optimized for the threading model of the GPU. We recently introduced the BLAZE-DEM framework for the GPU architecture that can model millions of pherical and polyhedral particles in a realistic time frame using a single GPU. In this paper we validate BLAZE-DEM for hopper discharge simulations. We firstly compare the flow-rates and patterns of polyhedra and spheres obtained with experiment to that of DEM. We then compare flow-rates between spheres and polyhedra to gauge the effect of particle shape. Finally we perform a large scale DEM simulation using 16 million articles to illustrate the capability of BLAZE-DEM to predict bulk flow in realistic hoppers.
URIhttp://hdl.handle.net/2117/187670
ISBN978-84-944244-7-2
Anglès
Collections
Share: