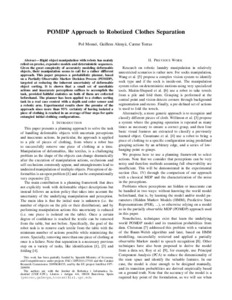 Rigid object manipulation with robots has mainly relied on precise, expensive models and deterministic sequences. Given the great complexity of accurately modeling deformable objects, their manipulation seems to call for a rather different approach. This paper proposes a probabilistic planner, based on a Partially Observable Markov Decision Process (POMDP), targeted at reducing the inherent uncertainty of deformable object sorting. It is shown that a small set of unreliable actions and inaccurate perceptions suffices to accomplish the task, provided faithful statistics on both of them are collected beforehand. The planner has been applied to a clothes sorting task in a real case context with a depth and color sensor and a robotic arm. Experimental results show the promise of the approach since more than 95% certainty of having isolated a piece of clothing is reached in an average of four steps for quite entangled initial clothing configurations.
CitationMonsó , P.; Alenyà, G.; Torras, C. POMDP approach to robotized clothes separation. A: IEEE/RSJ International Conference on Intelligent Robots and Systems. "Proceedings of the 2012 IEEE/RSJ International Conference on Intelligent Robots and Systems". Vilamoura: 2012, p. 1324-1329.
URIhttp://hdl.handle.net/2117/18767
DOI10.1109/IROS.2012.6386011
Publisher versionhttp://dx.doi.org/10.1109/IROS.2012.6386011