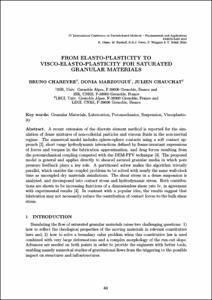 Show full item record
Chareyre, Bruno
Marzougui, Donia
Chauchat, Julien
Document typeConference report
PublisherCIMNE
Rights accessOpen Access
Abstract
A recent extension of the discrete element method is reported for the simulation of dense mixtures of non-colloidal particles and viscous fluids in the non-inertial regime. The numerical model includes sphere-sphere contacts using a soft contact ap- proach [2], short range hydrodynamic interactions defined by frame-invariant expressions of forces and torques in the lubrication approximation, and drag forces resulting from the poromechanical coupling computed with the DEM-PFV technique [3]. The proposed model is general and applies directly to sheared satured granular media in which pore pressure feedback plays a key role. A partitioned solver makes the algorithm trivially parallel, which enables the coupled problems to be solved with nearly the same wall-clock time as uncoupled dry materials simulations. The shear stress in a dense suspension is analyzed, and decomposed into contact stress and hydrodynamic stress. Both contributions are shown to be increasing functions of a dimensionless shear rate Iv, in agreement with experimental results [4]. In contrast with a popular idea, the results suggest that lubrication may not necessarily reduce the contribution of contact forces to the bulk shear stress.
URIhttp://hdl.handle.net/2117/187624
ISBN978-84-944244-7-2
Anglès
Collections
Share: