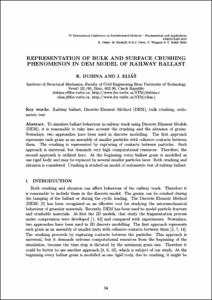 Show full item record
Dubina, R.
Eliás, J.
Document typeConference report
PublisherCIMNE
Rights accessOpen Access
Abstract
To simulate ballast behaviour in railway track using Discrete Element Models (DEM), it is reasonable to take into account the crushing and the abrasion of grains. Nowadays, two approaches have been used in discrete modelling. The ﬁrst approach represents each grain as an assembly of smaller particles with cohesive contacts between them. The crushing is represented by rupturing of contacts between particles. Such approach is universal, but demands very high computational resources. Therefore, the second approach is utilized here. At the beginning every ballast grain is modelled as one rigid body and may be replaced by several smaller particles later. Both crushing and abrasion is considered. Crushing is studied on model of oedometric test of railway ballast.
URIhttp://hdl.handle.net/2117/187621
ISBN978-84-944244-7-2
Anglès
Collections
Share: