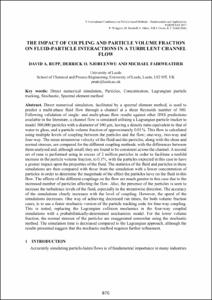 Show full item record
Rupp, David A.
Njobuenwu, Derrick O.
Fairweather, Michael
Document typeConference report
PublisherCIMNE
Rights accessOpen Access
All rights reserved. This work is protected by the corresponding intellectual and industrial property rights. Without prejudice to any existing legal exemptions, reproduction, distribution, public communication or transformation of this work are prohibited without permission of the copyright holder
Abstract
Direct numerical simulation, facilitated by a spectral element method, is used to predict a multi-phase fluid flow through a channel at a shear Reynolds number of 300. Following validation of single- and multi-phase flow results against other DNS predictions available in the literature, a channel flow is simulated utilising a Lagrangian particle tracker to model 300,000 particles with a diameter of 100 m, having a density ratio equivalent to that of water to glass, and a particle volume fraction of approximately 0.01%. This flow is calculated using multiple levels of coupling between the particles and the flow; one-way, two-way and four-way. The mean streamwise velocity of the fluid and the particles, along with the shear and normal stresses, are compared for the different coupling methods, with the differences between them analysed and, although small, they are found to be consistent across the channel. A second set of runs is performed using in excess of 2 million particles in order to facilitate a tenfold increase in the particle volume fraction, to 0.1%, with the particles expected in this case to have a greater impact upon the properties of the fluid. The statistics of the fluid and particles in these simulations are then compared with those from the simulation with a lower concentration of particles in order to determine the magnitude of the effect the particles have on the fluid in this flow. The effects of the different couplings on the flow are much greater in this case due to the increased number of particles affecting the flow. Also, the presence of the particles is seen to increase the turbulence levels of the fluid, especially in the streamwise direction. The accuracy of the simulations clearly increases with the level of coupling. However, the speed of the simulations decreases. One way of achieving decreased run times, for both volume fraction cases, is to use a faster stochastic version of the particle tracking code for four-way coupling. This is tested, replacing the Lagrangian collision mechanics in the four-way coupled simulations with a probabilistically-determined mechanistic model. For the lower volume fraction, the normal stresses of the particles are exaggerated somewhat using the stochastic method. The simulation time is decreased compared to the Lagrangian approach, although the results presented suggest that the stochastic method requires further refinement.
URIhttp://hdl.handle.net/2117/187604
ISBN978-84-946909-7-6
Collections
Share: