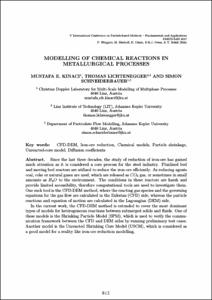 Show full item record
Kinaci, Mustafa E.
Lichtenegger, Thomas
Schneiderbauer, Simon
Document typeConference report
PublisherCIMNE
Rights accessOpen Access
All rights reserved. This work is protected by the corresponding intellectual and industrial property rights. Without prejudice to any existing legal exemptions, reproduction, distribution, public communication or transformation of this work are prohibited without permission of the copyright holder
Abstract
Since the last three decades, the study of reduction of iron-ore has gained much attention as it is considered a core process for the steel industry. Fluidized bed and moving bed reactors are utilized to reduce the iron-ore efficiently. As reducing agents coal, coke or natural gases are used, which are released as CO2 gas, or sometimes in small amounts as H2O to the environment. The conditions in these reactors are harsh and provide limited accessibility, therefore computational tools are used to investigate them. One such tool is the CFD-DEM method, where the reacting gas species and the governing equations for the gas flow are calculated in the Eulerian (CFD) side, whereas the particle reactions and equation of motion are calculated in the Lagrangian (DEM) side. In the current work, the CFD-DEM method is extended to cover the most dominant types of models for heterogeneous reactions between submerged solids and fluids. One of these models is the Shrinking Particle Model (SPM), which is used to verify the commu- nication framework between the CFD and DEM sides by running preliminary test cases. Another model is the Unreacted Shrinking Core Model (USCM), which is considered as a good model for a reality like iron-ore reduction modelling.
URIhttp://hdl.handle.net/2117/187599
ISBN978-84-946909-7-6
Collections
Share: