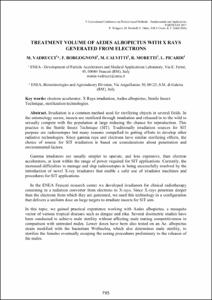 Show full item record
Vadrucci, M.
Borgognoni, F.
Calvitti, M.
Moretti, R.
Picardi, L.
Document typeConference report
PublisherCIMNE
Rights accessOpen Access
All rights reserved. This work is protected by the corresponding intellectual and industrial property rights. Without prejudice to any existing legal exemptions, reproduction, distribution, public communication or transformation of this work are prohibited without permission of the copyright holder
Abstract
Irradiation is a common method used for sterilizing objects in several fields. In the entomology sector, insects are sterilized through irradiation and released in to the wild to sexually compete with the population at large reducing the chance for reproduction. This practice is the Sterile Insect Technique (SIT). Traditionally irradiation sources for SIT purpose are radioisotopes but many reasons compelled to getting efforts to develop other radiative technologies. Since gamma rays and electrons have similar sterilizing effects, the choice of source for SIT irradiation is based on considerations about penetration and environmental factors. Gamma irradiators are usually simpler to operate, and less expensive, than electron accelerators, at least within the range of power required for SIT applications. Currently, the increased difficulties to manage and ship radioisotopes is being successfully resolved by the introduction of novel X-ray irradiators that enable a safer use of irradiator machines and procedures for SIT applications. In the ENEA Frascati research center we developed irradiators for clinical radiotherapy consisting in a radiation converter from electrons to X-rays. Since X-rays penetrate deeper than the electrons from which they are generated, we used this technology in a configuration that delivers a uniform dose on large targets to irradiate insects for SIT aim. In this topic, we gained practical experience working with Aedes albopictus, a mosquito vector of various tropical diseases such as dengue and zika. Several dosimetric studies have been conducted to achieve male sterility without affecting male mating competitiveness in comparison with untreated males. Lower doses have been also tested on an Ae. albopictus strain modified with the bacterium Wolbachia, which also determines male sterility, to sterilize the females eventually escaping the sexing procedures preliminary to the releases of the males.
URIhttp://hdl.handle.net/2117/187581
ISBN978-84-946909-7-6
Collections
Share: