Analysis of the key features of the seismic actions due to the three main earthquakes of May 11, 2011 in Lorca, Spain 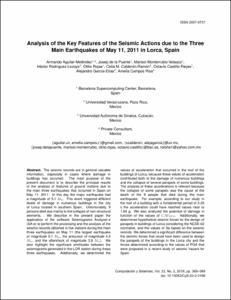 García Elías, Alejandro
Campos Ríos, Amelia
Document typeArticle
Rights accessOpen Access
All rights reserved. This work is protected by the corresponding intellectual and industrial property rights. Without prejudice to any existing legal exemptions, reproduction, distribution, public communication or transformation of this work are prohibited without permission of the copyright holder
Abstract
The seismic records are in general valuable information, especially in cases where damage in buildings has occurred. The main purpose of the present document is to describe the principal results of the analysis of features of ground motions due to the main three earthquakes that occurred in Spain on May 11, 2011. In this day the major earthquake had a magnitude of 5.1 Mw. This event triggered different levels of damage in numerous buildings in the city of Lorca located in southern Spain. Unfortunately, 9 persons died due mainly to the collapse of non-structural elements. We describe in the present paper the application of the software Seismograms Analyzer-e (SA-e) to perform the processing and the analysis of the seismic records obtained in five stations during the main three earthquakes on May 11 (the largest earthquake of magnitude 5.1 Mw, the precursor of magnitude 4.5 Mw, and the aftershock of magnitude 3.9 Mw). We also highlight the significant similitudes between the seismograms generated in the LOR station during these three earthquakes. Additionally, we determined the values of acceleration that occurred in the roof of the buildings of Lorca, because these values of acceleration contributed both to the damage of numerous buildings and the collapse of several parapets of some buildings. The analysis of these accelerations is relevant because the collapse of some parapets was the cause of the death of the 9 people that died during the main earthquake. For example, according to our study in the roof of a building with a fundamental period of 0.25 s the acceleration could have reached values near to 1.04 g. We also analyzed the potential of damage in function of the values of CAVSTD. Additionally, we determined hypothetical seismic forces for the design of parapets in buildings of Lorca considering the NCSE-02 normative, and the values of Sa based on the seismic records. We determined a significant difference between the seismic forces that could have been used to design the parapets of the buildings in the Lorca city and the forces determined according to the values of PGA that were proposed in a recent study of seismic hazard for Spain.
CitationAguilar, A. [et al.]. Analysis of the key features of the seismic actions due to the three main earthquakes of May 11, 2011 in Lorca, Spain. "Computación y sistemas", 2019, vol. 23, núm. 2, p. 365-389.
URIhttp://hdl.handle.net/2117/187569
DOI10.13053/CyS-23-2-3199
ISSN2007-9737
Publisher versionhttps://www.cys.cic.ipn.mx/ojs/index.php/CyS/article/view/3199/2650
Collections
Share: