Fusional method of mps and fem through tetrahedral mesh generation 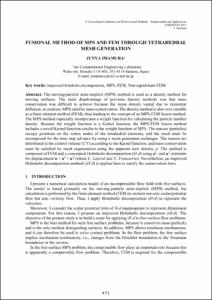 Show full item record
Imamura, Junya
Document typeConference report
PublisherCIMNE
Rights accessOpen Access
All rights reserved. This work is protected by the corresponding intellectual and industrial property rights. Without prejudice to any existing legal exemptions, reproduction, distribution, public communication or transformation of this work are prohibited without permission of the copyright holder
Abstract
The moving-particle semi-implicit (MPS) method is used as a density method for moving surfaces. The main disadvantage of previous density methods was that mass conservation was difficult to achieve because the mean density varied due to elemental diffusion; in contrast, MPS satisfies mass conservation. The density method is also very suitable as a finite element method (FEM), thus leading to the concept of an MPS-FEM fusion method. The MPS method especially incorporates a weight function for calculating the particle number density. Because the weight function is a Kernel function, the MPS-FEM fusion method includes a novel Kernel function similar to the weight function of MPS. The masses (particles) occupy positions on the vertex nodes of the tetrahedral elements, and the mesh must be recomposed for the time step advance by using a mesh generation technique. The masses are distributed in the control volume (CV) according to the Karnel function, and mass conservation must be satisfied by mesh regeneration using the apparent new density  . The method is composed of FEM and a conceptual Helmholtz decomposition (H-d) using uL- and uT-elements for displacement u = uL + uT (where L: Lateral and T: Transverse). Nevertheless, an improved Helmholtz decomposition method (iH-d) is applied here to satisfy the conservation laws.
URIhttp://hdl.handle.net/2117/187315
ISBN978-84-946909-7-6
Collections
Share: