Numerical study on the effect of particle shape on mixers 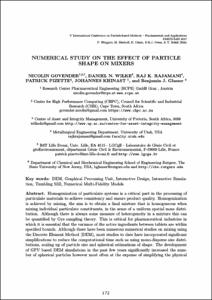 Show full item record
Govender, Nicolin
Wilke, Daniel M.
Rajamani, Raj K.
Pizette, Patrick
Khinast, Johannes
Glasser, Benjamin J.
Document typeConference report
PublisherCIMNE
Rights accessOpen Access
All rights reserved. This work is protected by the corresponding intellectual and industrial property rights. Without prejudice to any existing legal exemptions, reproduction, distribution, public communication or transformation of this work are prohibited without permission of the copyright holder
Abstract
Homogenization of particulate systems is a critical part in the processing of particulate materials to achieve consistency and ensure product quality. Homogenization is achieved by mixing, the aim is to obtain a ﬁnal mixture that is homogeneous when mixing individual particulate constituents, in the sense of a uniform spatial mass distribution. Although there is always some measure of heterogeneity in a mixture this can be quantiﬁed by Gys sampling theory. This is critical for pharmaceutical industries in which it is essential that the variance of the active ingredients between tablets are within speciﬁed bounds. Although there have been numerous numerical studies on mixing using the Discrete Element Method (DEM), most studies to date have incorporated signiﬁcant simpliﬁcations to reduce the computational time such as using mono-disperse size distributions, scaling up of particle size and spherical estimations of shape. The development of GPU based DEM simulations in the past few years signiﬁcantly increased the number of spherical particles however most often at the expense of simplifying the physical interaction between particles. This oversimpliﬁcation of particle shape has much wider primary implications as primary contact mechanisms such as angularity and locking are omitted. This is important in the pharmaceutical industry where the feed powders are often made from crystalline solids in which the shape of the individual particles are polyhedral. As this study demonstrates, this is signiﬁcant in that the underlining dynamics of polyhedral particles is vastly diﬀerent to that of spherical particles, resulting in tighter packing fractions diﬀerent ﬂow patterns, and percolation. In this paper we use the GPU based DEM code BlazeDEM3D-GPU to study and quantify the eﬀect of particle shape in a high shear blade mixer.
URIhttp://hdl.handle.net/2117/187104
ISBN978-84-946909-7-6
Collections
Share: