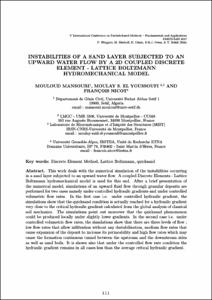 Show full item record
Mansouri, Mouloud
El Youssoufi, Moulay S.
Nicot, François
Document typeConference report
PublisherCIMNE
Rights accessOpen Access
All rights reserved. This work is protected by the corresponding intellectual and industrial property rights. Without prejudice to any existing legal exemptions, reproduction, distribution, public communication or transformation of this work are prohibited without permission of the copyright holder
Abstract
This work deals with the numerical simulation of the instabilities occurring in a sand layer subjected to an upward water ﬂow. A coupled Discrete Elements - Lattice Boltzmann hydromechanical model is used for this end. After a brief presentation of the numerical model, simulations of an upward ﬂuid ﬂow through granular deposits are performed for two cases namely under controlled hydraulic gradients and under controlled volumetric ﬂow rates. In the ﬁrst case i.e. under controlled hydraulic gradient, the simulations show that the quicksand condition is actually reached for a hydraulic gradient very close to the critical hydraulic gradient calculated from the global analysis of classical soil mechanics. The simulations point out moreover that the quicksand phenomenon could be produced locally under slightly lower gradients. In the second case i.e. under controlled volumetric ﬂow rates, the simulations show that there are three levels of ﬂow ; low ﬂow rates that allow inﬁltration without any destabilization, medium ﬂow rates that cause expansion of the deposit to increase its permeability and high ﬂow rates which may cause the formation continuous tunnel between the upstream and the downstream sides as well as sand boils. It is shown also that under the controlled ﬂow rate condition the hydraulic gradient remains in all cases less than the average critical hydraulic gradient.
URIhttp://hdl.handle.net/2117/187028
ISBN978-84-946909-7-6
Collections
Share: