Run to failure: aging of commercial battery cells beyond their end of life 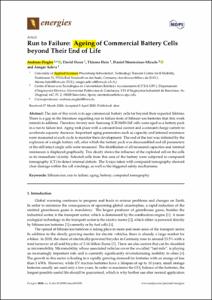 Ackva, Ansgar
Tipo de documentoArtículo
Condiciones de accesoAcceso abierto
Resumen
The aim of this work is to age commercial battery cells far beyond their expected lifetime. There is a gap in the literature regarding run to failure tests of lithium-ion batteries that this work intends to address. Therefore, twenty new Samsung ICR18650-26F cells were aged as a battery pack in a run to failure test. Aging took place with a constant load current and a constant charge current to accelerate capacity decrease. Important aging parameters such as capacity and internal resistance were measured at each cycle to monitor their development. The end of the test was initiated by the explosion of a single battery cell, after which the battery pack was disassembled and all parameters of the still intact single cells were measured. The distribution of all measured capacities and internal resistances is displayed graphically. This clearly shows the influence of the exploded cell on the cells in its immediate vicinity. Selected cells from this area of the battery were subjected to computed tomography (CT) to detect internal defects. The X-rays taken with computed tomography showed clear damage within the jelly roll, as well as the triggered safety mechanisms.
CitaciónAndreas, Z. [et al.]. Run to failure: aging of commercial battery cells beyond their end of life. "Energies", 11 Abril 2020, vol. 13, núm. 8, p. 1858:1-1858:11.
URIhttp://hdl.handle.net/2117/186958
DOI10.3390/en13081858
ISSN1996-1073
Versión del editorhttps://www.mdpi.com/1996-1073/13/8/1858
Colecciones
Comparte: