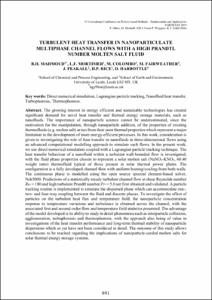 Show full item record
Mahmoud, B. H.
Mortimer, L. F.
Colombo, M.
Fairweather, M.
Peakall, J.
Rice, H. P.
Harbottle, D.
Document typeConference report
PublisherCIMNE
Rights accessOpen Access
Abstract
The growing interest in energy efficient and sustainable technologies has created significant demand for novel heat transfer and thermal energy storage materials, such as nanofluids. The importance of nanoparticle science cannot be underestimated, since the motivation for the manipulation, through nanoparticle addition, of the properties of existing thermofluids (e.g. molten salt) arises from their poor thermal properties which represent a major limitation to the development of more energy-efficient processes. In this work, consideration is given to investigating the role of heat transfer in nanofluids in three-dimensional flows using an advanced computational modelling approach to simulate such flows. In the present work, we use direct numerical simulation coupled with a Lagrangian particle tracking technique. The heat transfer behaviour of a nanofluid within a turbulent wall-bounded flow is investigated, with the fluid phase properties chosen to represent a solar molten salt (NaNO3-KNO3, 60:40 weight ratio) thermofluid typical of those present in solar thermal power plants. The configuration is a fully developed channel flow with uniform heating/cooling from both walls. The continuous phase is modelled using the open source spectral element-based solver, Nek5000. Predictions of a statistically steady turbulent channel flow at shear Reynolds number Reτ = 180 and high turbulent Prandtl number Prt = 5.0 are first obtained and validated. A particle tracking routine is implemented to simulate the dispersed phase which can accommodate one-, two- and four-way coupling between the fluid and discrete phases. To investigate the effect of particles on the turbulent heat flux and temperature field, the nanoparticle concentration response to temperature variations and turbulence is obtained across the channel, with the associated first and second-order flow and temperature field statistics presented. The advantage of the model developed is its ability to study in detail phenomena such as interparticle collisions, agglomeration, turbophoresis and thermophoresis, with the approach also being of value in investigations of the heat transfer performance and long-term thermal stability of nanoparticle dispersions which as yet have not been considered in detail. The outcome of this study allows conclusions to be reached regarding the implications of nanoparticle-seeded molten salts for solar thermal energy storage systems.
URIhttp://hdl.handle.net/2117/186858
ISBN978-84-121101-1-1
Collections
Share: