Two-mass gyro-particle as the tool for supersonic aeroelasticity analysis 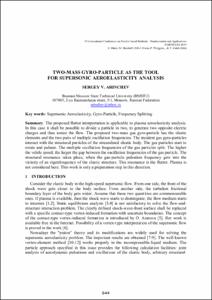 The proposed flutter interpretation is applicable to plasma aeroelasticity analysis. In this case it shall be possible to divide a particle in two, to generate two opposite electric charges and thus ionize the flow. The proposed two-mass gas gyro-particle has the elastic elements and the two pairs of multiple oscillation frequencies. The incident gas gyro-particles interact with the structural particles of the streamlined elastic body. The gas particles start to rotate and pulsate. The multiple oscillation frequencies of the gas particles split. The higher the vehile speed, the larger the gap between the oscillation frequencies of the gas particle. The structural resonance takes place, when the gas-particle pulsation frequency gets into the vicinity of an eigenfrequency of the elastic structure. This resonance is the flutter. Plasma is not considered here. This work is only a preparation step in this direction.
URIhttp://hdl.handle.net/2117/186849
ISBN978-84-121101-1-1