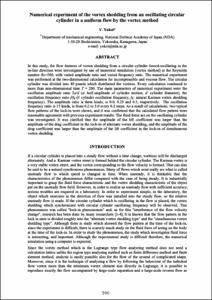 In this study, the flow features of vortex shedding from a circular cylinder forced-oscillating in the in-line direction were investigated by use of numerical simulation (vortex method) at the Reynolds number Re=500, with varied amplitude ratio and varied frequency ratio. The numerical experiment was performed at the two-dimensional calculation for incompressible and viscous flow. The circular cylinder was divided into 40 panels which distributed the vortices. Every calculation continued to more than non-dimensional time T = 200. The main parameters of numerical experiment were the oscillation amplitude ratio 2a/d (a: half-amplitude of cylinder motion, d: cylinder diameter), the oscillation frequency ratio f/fK (f: cylinder oscillation frequency, fK: natural Karman vortex shedding frequency). The amplitude ratio is three kinds, is 0.0, 0.25 and 0.5, respectively. The oscillation frequency ratio is 15 kinds, is from 0.2 to 3.0 every 0.2 steps. As a result of calculations, two typical flow patterns of the lock-in were shown, and it was confirmed that the calculated flow pattern were reasonable agreement with previous experiment results. The fluid force act on the oscillating cylinder was investigated. It was clarified that the amplitude of the lift coefficient was larger than the amplitude of the drag coefficient in the lock-in of alternate vortex shedding, and the amplitude of the drag coefficient was larger than the amplitude of the lift coefficient in the lock-in of simultaneous vortex shedding.
URIhttp://hdl.handle.net/2117/186819
ISBN978-84-121101-1-1