Aircraft Charging and its Influence on Triggered Lightning 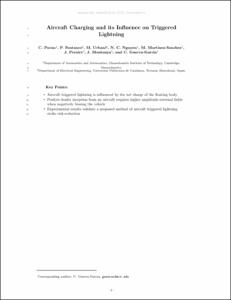 Except where otherwise noted, content on this work is licensed under a Creative Commons license : Attribution-NonCommercial-NoDerivs 3.0 Spain
Abstract
This paper reports on a laboratory experiment to study the effect of vehicle net charge on theinception of a positive leader from an aircraft exposed to high atmospheric electric fields. The experimentmodels the first stage of aircraft-triggered lightning in which a positive leader typically develops from thevehicle and is shortly afterwards followed by a negative leader. This mechanism of lightning initiationamounts to around 90% of strikes to aircraft. Aircraft can acquire net charge levels of the order of amillicoulomb from a number of sources including corona emission, charged particles in the engineexhaust, and charge transfer by collisions with particles in the atmosphere. In addition, aircraft couldpotentially be artificially charged through controlled charge emission from the surface. Experiments wereperformed on a model aircraft with a 1m wingspan, which was suspended between two parallel electrodesin a 1.45m gap with voltage difference of a few hundred kilovolts applied across it. In this configuration,it is found that the breakdown field can vary by as much as 30% for the range of charging levels tested. Theexperimental results show agreement with an electrostatic model of leader initiation from aircraft, and themodel indicates that the effect can be substantially stronger if additional negative charge is added to theaircraft. The results from this work suggest that flying uncharged is not optimal in terms of lightningavoidance and open up the possibility of developing risk-reduction strategies based on net charge control
CitationPavan, C. [et al.]. Aircraft Charging and its Influence on Triggered Lightning. "Journal of geophysical research: atmospheres", 16 Gener 2020, vol. 125, p. e2019JD031245:1-e2019JD031245:15.
URIhttp://hdl.handle.net/2117/186787
DOI10.1029/2019JD031245
ISSN2169-8996
Publisher versionhttps://agupubs.onlinelibrary.wiley.com/doi/abs/10.1029/2019JD031245
Collections
Share: