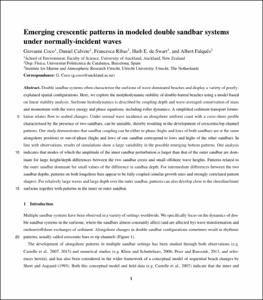 Document typeArticle
PublisherEuropean Geosciences Union (EGU)
Rights accessOpen Access
Abstract
Double sandbar systems often characterize the surf zone of wave-dominated beaches and display a variety of poorly explained spatial configurations. Here, we explore the morphodynamic stability of double-barred beaches using a model based on linear stability analysis. Surf zone hydrodynamics are described by coupling depth and wave-averaged conservation of mass and momentum with the wave energy and phase equations, including roller dynamics. A simplified sediment transport formulation relates flow to seabed changes. Under normal wave incidence, an alongshore uniform coast with a cross-shore profile characterized by the presence of two sandbars can be unstable, thereby resulting in the development of crescentic and/or rip channel patterns. Our study demonstrates that sandbar coupling can be either in phase (highs and lows of both sandbars are at the same alongshore position) or out of phase (highs and lows of one sandbar correspond to lows and highs of the other sandbar). In line with observations, results of simulations show a large variability in the possible emerging bottom patterns. Our analysis indicates that modes of which the amplitude of the inner sandbar perturbation is larger than that of the outer sandbar are dominant for large height–depth differences between the two sandbar crests and small offshore wave heights. Patterns related to the outer sandbar dominate for small values of the difference in sandbar depth. For intermediate differences between the two sandbar depths, patterns on both longshore bars appear to be fully coupled (similar growth rates and strongly correlated pattern shapes). For relatively large waves and large depth over the outer sandbar, patterns can also develop close to the shoreline and/or inner surf zone together with patterns in the inner or outer sandbar.
CitationCoco, G. [et al.]. Emerging crescentic patterns in modelled double sandbar systems under normally incident waves. "Earth surface dynamics", 6 Maig 2020, vol. 8, núm. 2, p. 323-334.
URIhttp://hdl.handle.net/2117/186717
DOI10.5194/esurf-8-323-2020
ISSN2196-6311
Publisher versionhttps://www.earth-surf-dynam.net/8/323/2020/esurf-8-323-2020.html
Collections
Share: