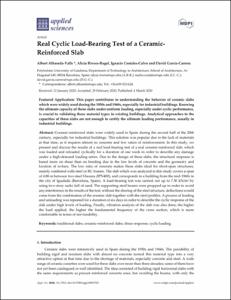 Document typeArticle
PublisherMultidisciplinary Digital Publishing Institute
Rights accessOpen Access
Abstract
Ceramic-reinforced slabs were widely used in Spain during the second half of the 20th century, especially for industrial buildings. This solution was popular due to the lack of materials at that time, as it requires almost no concrete and low ratios of reinforcement. In this study, we present and discuss the results of a real load-bearing test of a real ceramic-reinforced slab, which was loaded and reloaded cyclically for a duration of one week in order to describe any damage under a high-demand loading series. Due to the design of these slabs, the structural response is based more on shear than on bending due to the low levels of concrete and the geometry and location of re-bars. The low ratio of concrete makes these slabs ideal for short-span structures, mainly combined with steel or RC frames. The slab which was analyzed in this study covers a span of 4.88 m between two steel I-beams (IPN400), and corresponds to a building from the mid-1960s in the city of Igualada (Barcelona, Spain). A load-bearing test was carried out up to 7.50 kN/m2 by using two-story sacks full of sand. The supporting steel beams were propped up in order to avoid any interference in the results of the test; without the shoring of the steel structure, deflections would come from the combination of the ceramic slab together with the steel profiles. A process of loading and unloading was repeated for a duration of six days in order to describe the cyclic response of the slab under high levels of loading. Finally, vibration analysis of the slab was also done; the higher the load applied, the higher the fundamental frequency of the cross section, which is more comfortable in terms of serviceability.
CitationAlbareda-Valls, A. [et al.]. Real Cyclic Load-Bearing Test of a Ceramic-Reinforced Slab. "Applied sciences", 21 Gener 2020, vol. 10, núm. 1763, p. 1-14.
URIhttp://hdl.handle.net/2117/186652
DOI10.3390/app10051763
ISSN2076-3417
Publisher versionhttps://www.mdpi.com/2076-3417/10/5/1763
Collections
Share: