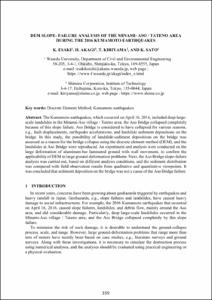 Show full item record
Esaki, K.
Akagi, G.
Kiriyama, T.
Sato, K.
Document typeConference report
PublisherCIMNE
Rights accessOpen Access
All rights reserved. This work is protected by the corresponding intellectual and industrial property rights. Without prejudice to any existing legal exemptions, reproduction, distribution, public communication or transformation of this work are prohibited without permission of the copyright holder
Abstract
The Kumamoto earthquakes, which occurred on April 16, 2016, included deep large-scale landslides in the Minami-Aso village / Tateno area; the Aso Bridge collapsed completely because of this slope failure. Aso Bridge is considered to have collapsed for various reasons, e.g., fault displacements, earthquake accelerations, and landslide sediment depositions on the bridge. In this study, the possibility of landslide-sediment depositions on the bridge was assessed as a reason for the bridge collapse using the discrete element method (DEM), and the landslides at Aso Bridge were reproduced. An experiment and analysis were conducted on the large deformation of aluminum-bar laminated ground with wall movement, to confirm the applicability of DEM to large ground-deformation problems. Next, the Aso Bridge slope-failure analysis was carried out, based on different analysis conditions, and the sediment distribution was compared with field observation results from qualitative and quantitative viewpoints. It was concluded that sediment deposition on the bridge was not a cause of the Aso Bridge failure.
URIhttp://hdl.handle.net/2117/186591
ISBN978-84-121101-1-1
Collections
Share: