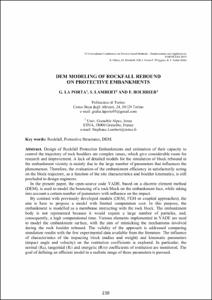 Show full item record
La Porta, G.
Lambert, S.
Bourrier, F.
Document typeConference report
PublisherCIMNE
Rights accessOpen Access
Abstract
Design of Rockfall Protection Embankments and estimation of their capacity to control the trajectory of rock boulders are complex issues, which give considerable room for research and improvement. A lack of detailed models for the simulation of block rebound in the embankment vicinity is mainly due to the large number of parameters that influences the phenomenon. Therefore, the evaluation of the embankment efficiency in satisfactorily acting on the block trajectory, as a function of the site characteristics and boulder kinematics, is still precluded to design engineers. In the present paper, the open-source code YADE, based on a discrete element method (DEM), is used to model the bouncing of a rock block on the embankment face, while taking into account a certain number of parameters with influence on the impact. By contrast with previously developed models (DEM, FEM or coupled approaches), the aim is here to propose a model with limited computation cost. In this purpose, the embankment is modelled as a membrane interacting with the rock block. The embankment body is not represented because it would require a large number of particles, and, consequently, a high computational time. Various elements implemented in YADE are used to model the embankment surface, with the aim of mimicking the mechanisms involved during the rock boulder rebound. The validity of the approach is addressed comparing simulation results with the few experimental data available from the literature. The influence of characteristics of the impacting block (radius and weight) and kinematic parameters (impact angle and velocity) on the restitution coefficients is explored. In particular, the normal (Rn), tangential (Rt) and energetic (RTE) coefficients of restitution are monitored. The goal of defining an efficient model in a realistic range of these parameters is pursued.
URIhttp://hdl.handle.net/2117/186517
ISBN978-84-121101-1-1
Collections
Share: