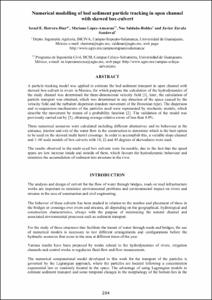 Show full item record
Herrera-Díaz, Israel E.
López-Amezcua, Mariano
Saldaña-Robles, Noe
Zavala Sandoval, Javier
Document typeConference report
PublisherCIMNE
Rights accessOpen Access
Abstract
A particle tracking model was applied to estimate the bed sediment transport in open channel with skewed box-culvert in rivers in Mexico, for which purpose the calculation of the hydrodynamics of the study channel was determined the three-dimensional velocity field [1], later, the calculation of particle transport was obtained, which was determined in any direction of the space caused by the velocity field and the turbulent dispersion (random movement of the Brownian type). The dispersion and re-suspension mechanisms of the particles used were represented by stochastic models, which describe the movement by means of a probability function [2]. The validation of the model was previously carried out by [3], obtaining average relative errors of less than 4.8%. Three numerical scenarios were calculated including different alternatives and its behaviour at the entrance, interior and exit of the water flow in the construction to determine which is the best option to be used on the skewed multi barrel crossings. In order to accomplish this, a variable slope channel and 1: 60 scale models of box culverts with 10, 22 and 45 degrees of skewedness were used. The results observed in the multi-eyed box culverts were favourable, due to the fact that the speed utside of them, which favours the hydrodynamic behaviour and minimize the accumulation of sediment into structure in the river.
URIhttp://hdl.handle.net/2117/186510
ISBN978-84-121101-1-1
Collections
Share: