Vorticity dynamics past an inclined elliptical cylinder at different re numbers: from periodic to chaotic solutions 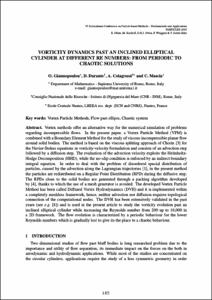 Show full item record
Giannopoulou, O.
Durante, D.
Colagrossi, A.
Mascia, C.
Document typeConference report
PublisherCIMNE
Rights accessOpen Access
Abstract
Vortex methods offer an alternative way for the numerical simulation of problems regarding incompressible flows. In the present paper, a Vortex Particle Method (VPM) is combined with a Boundary Element Method for the study of viscous incompressible planar flow around solid bodies. The method is based on the viscous splitting approach of Chorin [3] for the Navier-Stokes equations in vorticity-velocity formulation and consists of an advection step followed by a diffusion step. The evaluation of the advection velocity exploits the Helmholtz- Hodge Decomposition (HHD), while the no–slip condition is enforced by an indirect boundary integral equation. In order to deal with the problem of disordered spacial distribution of particles, caused by the advection along the Lagrangian trajectories [1], in the present method the particles are redistributed on a Regular Point distribution (RPD) during the diffusive step. The RPDs close to the solid bodies are generated through a packing algorithm developed by [4], thanks to which the use of a mesh generator is avoided. The developed Vortex Particle Method has been called Diffused Vortex Hydrodynamics (DVH) and it is implemented within a completely meshless framework, hence, neither advection nor diffusion requires topological connection of the computational nodes. The DVH has been extensively validated in the past years (see e.g. [8]) and is used in the present article to study the vorticity evolution past an inclined elliptical cylinder while increasing the Reynolds number from 200 up to 10,000 in a 2D framework. The flow evolution is characterized by a periodic behaviour for the lower Reynolds numbers which is gradually lost to give its the place to a chaotic behaviour.
URIhttp://hdl.handle.net/2117/186507
ISBN978-84-121101-1-1
Collections
Share: