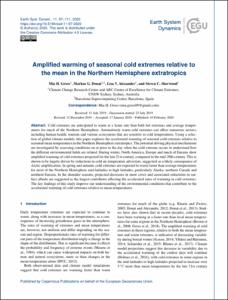 Except where otherwise noted, content on this work is licensed under a Creative Commons license : Attribution 3.0 Spain
Abstract
Cold extremes are anticipated to warm at a faster rate than both hot extremes and average temperatures for much of the Northern Hemisphere. Anomalously warm cold extremes can affect numerous sectors, including human health, tourism and various ecosystems that are sensitive to cold temperatures. Using a selection of global climate models, this paper explores the accelerated warming of seasonal cold extremes relative to seasonal mean temperatures in the Northern Hemisphere extratropics. The potential driving physical mechanisms are investigated by assessing conditions on or prior to the day when the cold extreme occurs to understand how the different environmental fields are related. During winter, North America, Europe and much of Eurasia show amplified warming of cold extremes projected for the late 21st century, compared to the mid-20th century. This is shown to be largely driven by reductions in cold air temperature advection, suggested as a likely consequence of Arctic amplification. In spring and autumn, cold extremes are expected to warm faster than average temperatures for most of the Northern Hemisphere mid-latitudes to high latitudes, particularly Alaska, northern Canada and northern Eurasia. In the shoulder seasons, projected decreases in snow cover and associated reductions in surface albedo are suggested as the largest contributor affecting the accelerated rates of warming in cold extremes. The key findings of this study improve our understanding of the environmental conditions that contribute to the accelerated warming of cold extremes relative to mean temperatures.
Related documenthttps://doi.org/10.5194/esd-11-97-2020-supplement
CitationGross, M. H. [et al.]. Amplified warming of seasonal cold extremes relative to the mean in the Northern Hemisphere extratropics. "Earth System Dynamics", 2020, vol. 11, núm. 1, p. 97-111.
URIhttp://hdl.handle.net/2117/186431
DOI10.5194/esd-11-97-2020
Publisher versionhttps://www.earth-syst-dynam.net/11/97/2020/#section10
Collections
Share: