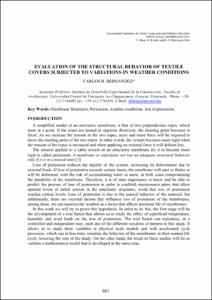 Show full item record
Hernández, Carlos H.
Document typeConference report
PublisherCIMNE
Rights accessOpen Access
Abstract
A simplified model of an anticlastic membrane is that of two perpendicular ropes, which meet at a point. If the ropes are tensed in opposite directions, the meeting point becomes is fixed. As we increase the tension in the two ropes, more and more force will be required to move the meeting point of the two ropes. In other words, the system becomes more rigid when the tension of the ropes is increased and when applying an external force it will deform less. The tension applied to a cable system or an anticlastic membrane for it to become more rigid is called pretension. A membrane or anticlastic net has an adequate structural behavior only if it is in a tensed state.[1] Loss of pretension reduces the rigidity of the system, increasing its deformation due to external loads. If loss of pretension exceeds certain limits, the membrane will start to flutter or will be deformed, with the risk of accumulating water or snow, in both cases compromising the durability of the membrane. Therefore, it is of utter importance to know and be able to predict the process of loss of pretension in order to establish maintenance plans that allow optimal levels of initial tension in the anticlastic structures, avoid that loss of pretension reaches critical levels. Loss of pretension is due to the natural behavior of the material, but additionally, there are external factors that influence loss of pretension of the membranes, among these, we can mention the weather as a factor that affects tensional life of membranes. In this work we will try to prove this hypothesis. In order to do this, the first stage will be the development of a trial bench that allows us to study the effect of superficial temperature, humidity and wind loads on the loss of pretension. The trial bench can reproduce, in a controlled and independent way, each one of the different variables of interest to this study. It allows us to study these variables in physical scale models and with accelerated cycle processes, which can in less time, simulate the behavior of the membranes in their normal life cycle, lowering the cost of the study. On the other hand, the result of these studies will let us validate a mathematical model that is developed at the same time.
URIhttp://hdl.handle.net/2117/186346
ISBN978-84-89925-58-8
Collections
Share: