Database interactive and analysis of the pneumatic envelope systems, through the study of their main qualitative parameters 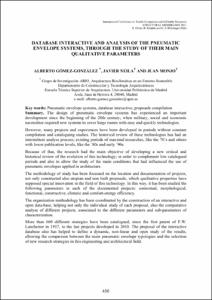 Show full item record
Gómez-González, Alberto
Neila, Javier
Monjo, Juan
Document typeConference report
PublisherCIMNE
Rights accessOpen Access
All rights reserved. This work is protected by the corresponding intellectual and industrial property rights. Without prejudice to any existing legal exemptions, reproduction, distribution, public communication or transformation of this work are prohibited without permission of the copyright holder
Abstract
The design of pneumatic envelope systems has experienced an important development since the beginning of the 20th century; when military, social and economic necessities required new systems to cover large rooms with easy and quickly technologies. However, many projects and experiences have been developed in periods without constant compilation and cataloguing studies. The historical review of these technologies has had an intermittent analyse process; existing periods of maximal researches, like the 70´s and others with lower publication levels, like the ´80s and early ´90s. Because of that, the research had the main objective of developing a new critical and historical review of the evolution of this technology; in order to complement low catalogued periods and also to allow the study of the main conditions that had influenced the use of pneumatic envelopes applied in architecture. The methodology of study has been focussed on the location and documentation of projects, not only constructed also utopian and non built proposals, which qualitative properties have supposed special innovation in the field of this technology. In this way, it has been studied the following parameters in each of the documented projects: contextual, morphological, functional, constructive, climatic and comfort-energy efficiency. The organization methodology has been coordinated by the construction of an interactive and open data-base, helping not only the individual study of each proposal, also the comparative analyse of different projects, associated to the different parameters and sub-parameters of characterization. More than 660 different strategies have been catalogued, since the first patent of F.W. Lanchester in 1917, to the last projects developed in 2010. The proposal of the interactive database also has helped to define a dynamic, non-linear and open study of the results, allowing the comparison between the main pneumatic envelope typologies and the selection of new research strategies in this engineering and architectural field.
URIhttp://hdl.handle.net/2117/186233
ISBN978-84-89925-58-8
Collections
Share: