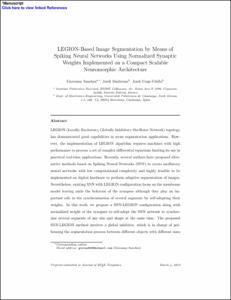 Except where otherwise noted, content on this work is licensed under a Creative Commons license : Attribution-NonCommercial-NoDerivs 3.0 Spain
Abstract
LEGION (Locally Excitatory, Globally Inhibitory Oscillator Network) topology has demonstrated good capabilities in scene segmentation applications. However, the implementation of LEGION algorithm requires machines with high performance to process a set of complex differential equations limiting its use in practical real-time applications. Recently, several authors have proposed alternative methods based on spiking neural networks (SNN) to create oscillatory neural networks with low computational complexity and highly feasible to be implemented on digital hardware to perform adaptive segmentation of images. Nevertheless, existing SNN with LEGION configuration focus on the membrane model leaving aside the behavior of the synapses although they play an important role in the synchronization of several segments by self-adapting their weights. In this work, we propose a SNN-LEGION configuration along with normalized weight of the synapses to self-adapt the SNN network to synchronize several segments of any size and shape at the same time. The proposed SNN-LEGION method involves a global inhibitor, which is in charge of performing the segmentation process between different objects with different sizes and shapes on time. To validate the proposal, the SNN-LEGION method is implemented on an optimized scalable neuromorphic architecture. Our preliminary results demonstrate that the proposed normalization process of the synaptic weights along with the SNN-LEGION configuration keep the capacity of the LEGION network to separate the segments on time, which can be useful in video processing applications such as vision processing systems for mobile robots, offering lower computational complexity and area consumption compared with previously reported solutions.
Description
© <2019>. This manuscript version is made available under the CC-BY-NC-ND 4.0 license http://creativecommons.org/licenses/by-nc-nd/4.0/
CitationSánchez , G.; Madrenas, J.; Cosp, J. LEGION-based image segmentation by means of spiking neural networks using normalized synaptic weights implemented on a compact scalable neuromorphic architecture. "Neurocomputing", 1 Gener 2019, vol. 352, p. 106-120.
URIhttp://hdl.handle.net/2117/186127
DOI10.1016/j.neucom.2019.04.037
ISSN0925-2312
Publisher versionhttps://www.sciencedirect.com/science/article/pii/S0925231219306186
Collections
Share: