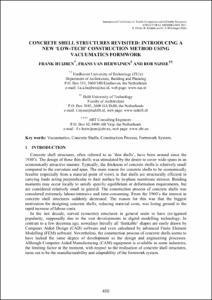 Show full item record
Huijben, Frank
Van Herwijnen, Frans
Nijsse, Rob
Document typeConference report
PublisherCIMNE
Rights accessOpen Access
Abstract
Concrete shell structures, often referred to as ‘thin shells’, have been around since the 1930’s. The design of these thin shells was stimulated by the desire to cover wide spans in an economically attractive manner. Typically, the thickness of concrete shells is relatively small compared to the curvature and span. The main reason for concrete shells to be economically feasible (especially from a material point of view), is that shells are structurally efficient in carrying loads acting perpendicular to their surface by in-plane membrane stresses. Bending moments may occur locally to satisfy specific equilibrium or deformation requirements, but are considered relatively small in general. The construction process of concrete shells was considered extremely labour-intensive and time-consuming. From the 1960’s the interest in concrete shell structures suddenly decreased. The reason for this was that the biggest motivation for designing concrete shells, reducing material costs, was losing ground to the rapid increase of labour costs.
URIhttp://hdl.handle.net/2117/186107
ISBN978-84-89925-58-8
Collections
Share: