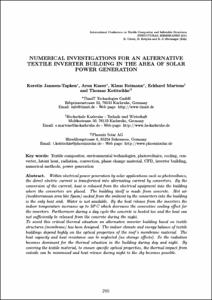 Show full item record
Janssen-Tapken, Kerstin
Kneer, Aron
Reimann, Klaus
Martens, Eckhard
Kotitschke, Thomas
Document typeConference report
PublisherCIMNE
Rights accessOpen Access
Abstract
Within electrical power generation by solar applications such as photovoltaics, the direct electric current is transformed into alternating current by converters. By the conversion of the current, heat is released from the electrical equipment into the building where the converters are placed. The building itself is made from concrete. Hot air (mediterranean area like Spain) sucked from the ambient by the converters into the building is the only heat sink. Water is not available. By the heat release from the inverters the indoor temperature increases up to 50 C which decreases the convective cooling effect for the inverters. Furthermore during a day cycle the concrete is heated too and the heat can not sufficiently be released from the concrete during the night. To avoid this critical thermal situation an alternative inverter building based on textile structures (membrane) has been designed. The indoor climate and energy balance of textile buildings depend highly on the optical properties of the roof’s membrane material. The heat capacity and heat resistance can be neglected (no storage effects). So the radiation becomes dominant for the thermal situation in the building during day and night. By covering the textile material, to ensure specific optical properties, the thermal impact from outside can be minimized and heat release during night to the sky becomes possible. To validate the concept, a complex three-dimensional numerical model has been set-up including heat sources inside the building. To prohibit temperature increase during the day a passive cooling system based on phase change materials [2] has been integrated into the model. Based on the numerical model a time dependent computation of the thermal behaviour of the textile building has been performed including irradiation of the sun (solar, the simulation show that the complex thermal transport mechanism for textile buildings can be well predicted by the used computing technology (CFD). Furthermore it can be demonstrated that the concept of the textile building can be a good alternative to a building made of concrete.
URIhttp://hdl.handle.net/2117/186071
ISBN978-84-89925-58-8
Collections
Share: