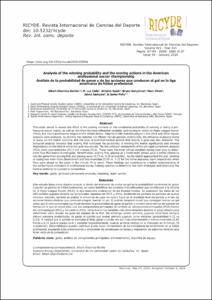 Document typeArticle
Rights accessOpen Access
Abstract
This study aimed to assess the effect of the scoring moment on the conditional probability of winning or losing a professional soccer match, as well as identified the most influential variables contributing to victory in Major League Soccer (MLS), the men’s professional league in the United States. Data from 680 matches played in the 2015 and 2016 regular seasons were analysed, by dividing the matches into fifteen-minute periods. Additionally, the influence of playing home or away on the match outcome and the type of technical-tactical actions that lead to a goal was also analysed. The temporal analysis revealed that scoring first increased the probability of winning the match significantly and showed dependency on the time in which the goal was scored. The two principal components of the principal component analysis (PCA) were counterattacks (PC1) and crosses (PC2). These were the most critical variables during open play to determine how MLS teams scored goals. Nevertheless, scoring first, playing as a home team always gave a better chance to win the game than scoring first and playing away (0.72 vs. 0.32 probability). As the match approached the end, winning or losing was even more determinant and less reversible (0.85 vs. 0.72 for the home and away team respectively when they were ahead on the score in the minute 75 or later). These findings can contribute to a better understanding of the performance indicators in professional soccer, helping coaches to determine the right strategies and improving the tactical patterns to succeed in competition
CitationSusin, A. Analysis of the winning probability and the scoring actions in the American professional soccer championship. "RICYDE. Revista Internacional de Ciencias del Deporte", 1 Gener 2020, vol. 16, núm. 59, p. 67-84.
URIhttp://hdl.handle.net/2117/186063
DOI10.5232/ricyde2020.05906
ISSN1885-3137
Publisher versionhttps://www.cafyd.com/REVISTA/05906.pdf
Collections
Share: