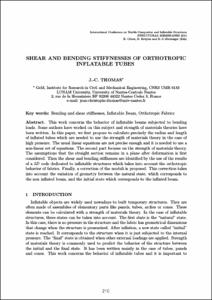 Show full item record
Thomas, J-C.
Document typeConference report
PublisherCIMNE
Rights accessOpen Access
Abstract
This work concerns the behavior of inflatable beams subjected to bending loads. Some authors have worked on this subject and strength of materials theories have been written. In this paper, we first propose to calculate precisely the radius and length of inflated tubes which are needed to use the strength of materials theory in the case of high pressure. The usual linear equations are not precise enough and it is needed to use a non-linear set of equations. The second part focuses on the strength of materials theory. The assumptions that the straight section remains in a plane after deformation is first considered. Then the shear and bending stiffnesses are identified by the use of the results of a 3D code dedicated to inflatable structures which takes into account the orthotropic behavior of fabrics. Finally, a correction of the moduli is proposed. This correction takes into account the variation of geometry between the natural state, which corresponds to the non inflated beam, and the initial state which corresponds to the inflated beam.
URIhttp://hdl.handle.net/2117/185984
ISBN978-84-89925-58-8
Collections
Share: