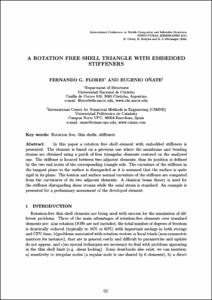 Document typeConference report
PublisherCIMNE
Rights accessOpen Access
Abstract
In this paper a rotation free shell element with embedded stiffeners is presented. The element is based on a previous one where the membrane and bending strains are obtained using a patch of four triangular elements centered on the analyzed one. The stiffener is located between two adjacent elements, thus its position is defined by the two end nodes of the corresponding triangle side. The curvature of the stiffener in the tangent plane to the surface is disregarded as it is assumed that the surface is quite rigid in its plane. The torsion and surface normal curvature of the stiffener are computed from the curvatures of its two adjacent elements. A classical beam theory is used for the stiffener disregarding shear strains while the axial strain is standard. An example is presented for a preliminary assessment of the developed element.
URIhttp://hdl.handle.net/2117/185969
ISBN978-84-89925-58-8
Collections
Share: