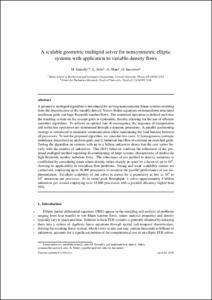 Document typeArticle
Rights accessOpen Access
Abstract
A geometric multigrid algorithm is introduced for solving nonsymmetric linear systems resulting from the discretization of the variable density Navier-Stokes equations on nonuniform structured rectilinear grids and high-Reynolds number flows. The restriction operation is defined such that the resulting system on the coarser grids is symmetric, thereby allowing for the use of efficient smoother algorithms. To achieve an optimal rate of convergence, the sequence of interpolation and restriction operations are determined through a dynamic procedure. A parallel partitioning strategy is introduced to minimize communication while maintaining the load balance between all processors. To test the proposed algorithm, we consider two cases: 1) homogeneous isotropic turbulence discretized on uniform grids and 2) turbulent duct flow discretized on stretched grids. Testing the algorithm on systems with up to a billion unknowns shows that the cost varies linearly with the number of unknowns. This behavior confirms the robustness of the proposed multigrid method regarding ill-conditioning of large systems characteristic of multiscale high-Reynolds number turbulent flows. The robustness of our method to density variations is established by considering cases where density varies sharply in space by a factor of up to 10000, showing its applicability to two-phase flow problems. Strong and weak scalability studies are carried out, employing up to 30000 processors, to examine the parallel performance of our implementation. Excellent scalability of our solver is shown for a granularity as low as 10000 to 100000 unknowns per processor. At its tested peak throughput, it solves approximately 4 billion unknowns per second employing over 16000 processors with a parallel efficiency higher than 50%.
CitationJofre, L. A scalable geometric multigrid solver for nonsymmetric elliptic systems with application to variable-density flows. "Journal of computational physics", 2018, vol. 357, p. 142-158.
URIhttp://hdl.handle.net/2117/185770
DOI10.1016/j.jcp.2017.12.024
ISSN0021-9991
Publisher versionhttps://doi.org/10.1016/j.jcp.2017.12.024
Collections
Share: