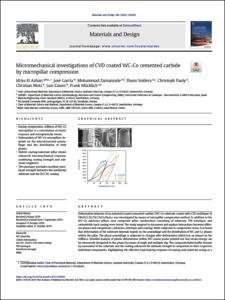 Mücklich, Frank T.
Document typeArticle
PublisherElsevier
Rights accessOpen Access
Abstract
Deformation behavior of an industrial coated cemented carbide (WC-Co substrate coated with CVD multilayer of TiN/Zr(C,N)/Ti(C,N,O)/Al2O3) was investigated by means of micropillar compression method. In addition to the WC-Co substrate pillars, new composite pillar combination consisting of substrate, TiN interlayer and carbonitride hard coating were tested. The study targeted to document and analyze interactions between different phases and components (substrate, interlayer and coating) while subjected to compressive stress. It is found that deformation of the substrate depends mainly on the assemblage and the distribution of WC and Co phases within the pillar. The phase assemblage is subjected to changes after deformation which has an impact on the stiffness. Detailed analysis of plastic deformation within WC coarse grains pointed out that strain energy can be extensively dissipated in this phase by means of single and multiple slip. The composite/hybrid pillar formed by association of the substrate and the coating enhanced the ultimate strength in comparison to their respective individual components, highlighting the effective load-bearing response of coating and substrate acting as a coated system. This assessment was further supported by the excellent interfacial strength attested by the established TiN interlayer between the substrate and the coating.
CitationEl Azhari, I. [et al.]. Micromechanical investigations of CVD coated WC-Co cemented carbide by micropillar compression. "Materials & design", 15 Gener 2020, vol. 186, p. 108283:1-108283:10.
URIhttp://hdl.handle.net/2117/185697
DOI10.1016/j.matdes.2019.108283
ISSN0264-1275
Publisher versionhttps://www.sciencedirect.com/science/article/pii/S026412751930721X
Collections
Share: