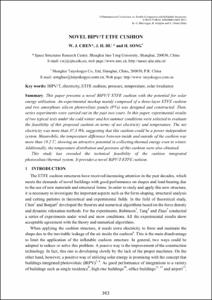 Show full item record
Chen, W.J.
Hu, J.H.
Song, H.
Document typeConference report
PublisherCIMNE
Rights accessOpen Access
Abstract
This paper presents a novel BIPV/T ETFE cushion with the potential for solar energy utilization. An experimental mockup mainly composed of a three-layer ETFE cushion and two amorphous silicon photovoltaic panels (PVs) was designed and constructed. Then, series experiments were carried out in the past two years. In this paper, experimental results of two typical tests under the cold winter and hot summer conditions were selected to evaluate the feasibility of this proposed cushion in terms of net electricity and temperature. The net electricity was more than 37.3 Wh, suggesting that this cushion could be a power independent system. Meanwhile, the temperature difference between inside and outside of the cushion was more than 19.2 ℃ , showing an attractive potential in collecting thermal energy even in winter. Additionally, the temperature distribution and pressure of this cushion were also obtained. This study has revealed the technical feasibility of the cushion integrated photovoltaic/thermal system. It provides a novel BIPV/T ETFE cushion.
URIhttp://hdl.handle.net/2117/185639
ISBN978-84-941686-0-4
Collections
Share: