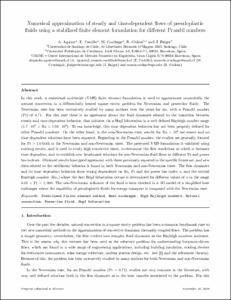 Except where otherwise noted, content on this work is licensed under a Creative Commons license : Attribution-NonCommercial-NoDerivs 4.0 International
Abstract
In this work, a variational multiscale finite element formulation is used to approximate numerically the lid-driven cavity flow problem for high Reynolds numbers. For Newtonian fluids, this benchmark case has been extensively studied by many authors for low and moderate Reynolds numbers (up to Re=10,000), giving place to steady flows, using stationary and time-dependent approaches. For more convective flows, the solution becomes unstable, describing an oscillatory behavior. The critical Reynolds number which gives place to this time-dependent fluid dynamics has been defined over a wide range 7, 300 ≲ Re ≲ 35, 000, using different numerical approaches. In the non-Newtonian case, the cavity problem has not been studied deeply for high Reynolds number (Re > 10, 000), specifically, in the oscillatory time-dependent case. A VMS formulation is presented to be validated using existing results, to determine flow conditions at which the instability appears, and lastly, to establish new benchmark solutions for high-Reynolds numbers fluid flows using the power-law model. Obtained results show a good agreement with those reported in the references, and new data related with the oscillatory behavior of the flow has been found for the non-Newtonian case. In this regard, time-dependent flows show dependence on both Reynolds number and power-law index, and the unsteady starting point has been determined for all studied cases. It is determined that the critical Reynolds number (Rec) that defines the first Hopf bifurcation for Newtonian fluid flow is ranged between 8,100 ≲ Rec ≲ 8, 250, whereas for power-law indexes n=0.5 and n=1.5, it is 7,100 ≲ Rec ≲ 7,200 and 18,250 ≲ Rec ≲ 18,500, respectively.
CitationAguirre, A. [et al.]. Stationary and time-dependent numerical approximation of the lid-driven cavity problem for power-law fluid flows at high Reynolds numbers using a stabilized finite element formulation of the VMS type. "Journal of non-newtonian fluid mechanics", Juliol 2018, vol. 257, p. 22-43.
URIhttp://hdl.handle.net/2117/185480
DOI10.1016/j.jnnfm.2018.03.014
ISSN0377-0257
Publisher versionhttps://www.sciencedirect.com/science/article/pii/S0377025717304044
Other identifiershttps://www.researchgate.net/publication/323959125_Stationary_and_time-dependent_numerical_approximation_of_the_lid-driven_cavity_problem_for_power-law_fluid_flows_at_high_Reynolds_numbers_using_a_stabilized_finite_element_formulation_of_the_VMS_type
Collections
Share: