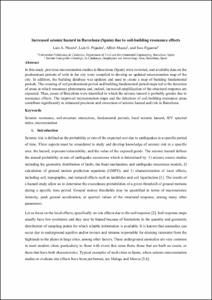 Except where otherwise noted, content on this work is licensed under a Creative Commons license : Attribution-NonCommercial-NoDerivs 4.0 International
ProjectDESARROLLO Y APLICACION DE HERRAMIENTAS AVANZADAS PARA LA EVALUACION, PREVENCION Y GESTION DEL RIESGO SISMICO (MINECO-CGL2015-65913-P)
Abstract
In this study, previous microzonation studies in Barcelona (Spain) were revisited, and available data on the predominant periods of soils in the city were compiled to develop an updated microzonation map of the city. In addition, the building database was updated and used to create a map of building fundamental periods. The crossing of soil predominant period and building fundamental period maps led to the detection of areas in which resonance phenomena and, indeed, increased amplification of the structural response are expected. Thus, zones of Barcelona were identified in which the seismic hazard is probably greater due to resonance effects. The improved microzonation maps and the detection of soil-building resonance areas contribute significantly to enhanced precision and awareness of seismic hazard and risk in Barcelona.
CitationPinzon, L. [et al.]. Increased seismic hazard in Barcelona (Spain) due to soil-building resonance effects. "Soil dynamics and earthquake engineering", Febrer 2019, vol. 117, p. 245-250.
URIhttp://hdl.handle.net/2117/185463
DOI10.1016/j.soildyn.2018.11.022
ISSN0267-7261
Publisher versionhttps://www.sciencedirect.com/science/article/pii/S0267726118309916
Other identifiershttps://www.researchgate.net/publication/329802744_Increased_seismic_hazard_in_Barcelona_Spain_due_to_soil-building_resonance_effects
Collections
Share: