The key of the development of commercial maritime transport : the cooperation between Mediterranean Sea and Black Sea 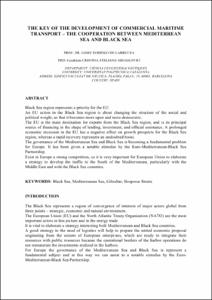 Steliana Mihailovici, Cristina
Document typeExternal research report
Rights accessOpen Access
Abstract
Black Sea region represents a priority for the EU. An EU action in the Black Sea region is about changing the structure of the social and political weight, so that it becomes more open and more democratic. The EU is the main destination for exports from the Black Sea region, and is its principal source of financing in the shape of lending, investment, and official assistance. A prolonged economic recession in the EU has a negative effect on growth prospects for the Black Sea region, whereas a rapid recovery represents an undoubted boost. The governance of the Mediterranean Sea and Black Sea is becoming a fundamental problem for Europe. It has been given a notable stimulus by the Euro-Mediterranean-Black Sea Partnership. Exist in Europe a strong competition, so it is very important for European Union to elaborate a strategy to develop the traffic to the South of the Mediterranean, particularly with the Middle East and with the Black Sea countries.
CitationRodrigo, J.; Steliana , C. "The key of the development of commercial maritime transport : the cooperation between Mediterranean Sea and Black Sea". 2013.
URIhttp://hdl.handle.net/2117/18545
Collections
Share: